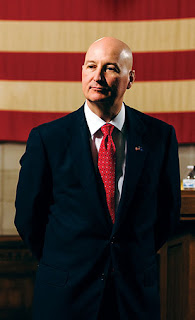 LINCOLN – Today, Governor Pete Ricketts issued a statement following the release of a new report by the Biden-Harris Administration on their 30 x 30 plan.

“Nebraskans have rightly been concerned about President Biden’s radical climate agenda and his 30 x 30 plan,” said Gov. Ricketts.  “To date, his plans have been long on lofty goals and short on details, which has fueled speculation and concern.  Today’s report provides few new details and more vague platitudes and goals—and it’s not good.”

“Nebraskans should not be deceived by the report’s ‘America the Beautiful’ branding.  This rollout includes the endorsements of a wide array of environmental lobbying groups while mainstream agriculture stakeholders continue to be cut out of the process.”

“While the report states that 30 x 30 will include voluntary private measures, at least in part, this reassurance is not enough.  If the Biden Administration really believed that voluntary measures worked, they would leave conservation efforts to the states and private landowners instead of pursuing a national strategy that imposes goals written by federal bureaucrats.”

“As President Biden’s 30 x 30 plan begins to evolve and take shape, my administration will work to stop any interference with our rights that arises.  I encourage Nebraskans to be on the lookout in their community for potential federal interventions or other attempts to make land less available.  Together, we can push back on federal overreach and protect our way of life.”

A copy of the report can be found by clicking here.

Andrew on day 2 of COVID, and in 1692 the people had enough of the Salem witch trials