MilkSouceLLC in Wisconsin provides us
at January 03, 2015 No comments:

Be patient girls I am sure McDonalds will get back to us ASAP on the sustainable way to get you water today. 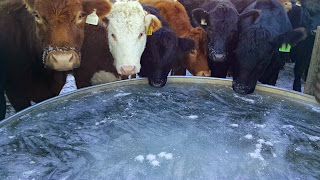 Jolley, Runkle and Grandin are really up to what?

As we charge into 2015, there will be nothing more important than stopping the self-destruction from within. The fox is in the hen house and that has never been an more appropriate analogy.

In this post I plan to shA)are with you the facts and you can make your own decisions as to what is really going on.

First off, multiple agricultural media outlets have posted an article by Chuck Jolley that suggests that the actions of a couple of animal rights activists will actually improve the future of milk, meat and egg production. 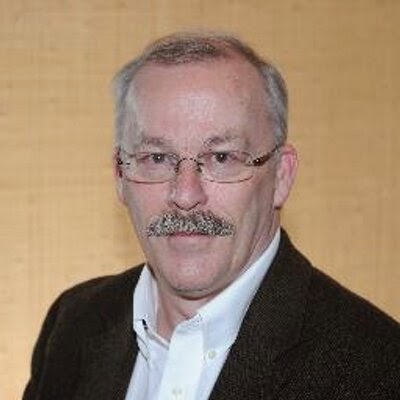 In December 2014 Jolley penned a written piece calling Mercy for Animals (MfA) part of the "solution" to animal abuse. He makes a great case for Mercy for Animals not being like other animals rights groups yet all industry experts agree that Nathan Runkle is just another vegan animal rights zealot that stops at nothing short of ending animal agriculture.

As much as I would like to link to the piece he wrote with a positive light on Nathan Runkle and Mercy for Animals, Drovers has removed the link to the website for obvious reasons of integrity. 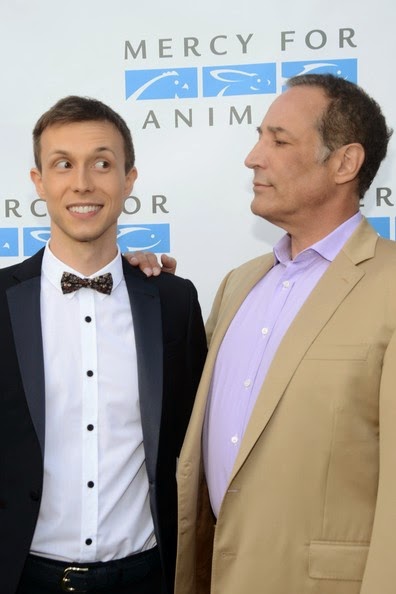 This photo from the "Free to Be" a Hollywood Gala of Runkle with extreme vegan activist Sam Simon says it all. The event is sponsored by vegan groups and Runkle is not interested in better treatment for animals but simply wants the farming of  animals to cease.

Within one week of the Jolley article appearing in Drovers publications, Runkle made statements such as:

"Sexual abuse of cows in Factory Farms is not uncommon" he said in a Huffington Post interview along side Matthew Dominguez from HSUS.

"The success of the NYC Vegetarian Food Festival and the dozens of similar events sprouting up all over the nation, is a true testament to the growing interest and excitement surrounding plant based eating. MfA's outreach at such events is aimed at informing and inspiring attendees to explore veganism and for those who are already vegan to put their compassion into action by becoming involved in animal advocacy protection efforts."  as told to One Green Planet.

Jolley gives credit to vegan zealot Runkle for outing bad apples in food animal production when in fact the "undercover" videos have been staged and produced like the Hollywood productions and actors MfA panders to for money.

"I am still waiting for someone to tell me what MFA undercover videos have actually done for animal welfare. It's not about concern for animal welfare it's about their vegetarian/vegan agenda and putting those in animal agriculture out of business."

Additionally Chuck Jolley relentlessly promotes Dr. Temple Grandin as part of the solution to improved animal welfare. I must ask what her credentials are? 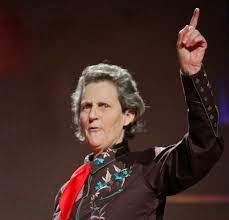 How many peer-reviewed scientific pieces of research has Dr. Grandin published on animal welfare?

ZERO! She has yet to publish a single article on dairy welfare, pig welfare, chicken welfare or cattle welfare.

The only bit of science you will find Dr. Grandin involved in with food animals is the behavior of cattle based on the placement of the swirl on their head.

For most who may be skeptics on Dr. Grandin's true credibility on animal welfare, I put together a short list of statements she has made about animal welfare.

If you take the time to read them all, you soon find out that she bases her "research" on the polls she takes of uninformed consumers not true scientists. Her suggested mode of food production has been adapted by the EU and has proven to be a flaming disaster for domestically produced food.


“I was raised in the East,” she adds. ”I go back and forth between both worlds. It gives me a different perspective. Ten years ago, at a Christmas dinner, my sister bought up the subject of sow gestation stalls. There was no way I was going to sell her on it. I can’t sell it to the public. Two-thirds of the public has a problem with a sow not being able to turn around. So gestation stalls have got to go. They will be phased out slowly. Survey show acceptance of raising pigs inside on slatted floors. It does require more building space.”

“We’ve gotten better with humane handling, but now we’re getting animals that are harder to handle,” she says. “Some pigs are mean. We’ve bred pigs for leanness, but unfortunately it also has selected for aggression. Some of our lean girls are mean girls who like to fight. That has to be changed. I see lameness in cattle from product use, and bigger animals that are heat-stressed. When you breed animals to grow, grow, grow, they may lose disease resistance. Nature has trade-offs. We have to look at what’s optimal. But profit incentive gets in the way.”
Speaking to Iowa Farm Bureau 2012

Some dairies do a good job of keeping lameness under control, she added. “But there are other places where the lameness is absolutely horrible.”
Dairy Herd Management  June 2011

“We’ve got work to do in the dairy industry, and we have areas of management which need to be improved.”” Her challenge to the industry is to re-evaluate our procedures in dairy herd husbandry and to implement programs enabling dairy to represent the beef market with the same goals for quality as we pursue the milk market.
To a group of Humane Agents in PA 2012

She said the dairy industry has widespread problems with cows that are lame or too thin. "Many farmers have gotten accustomed to keeping livestock in poor condition and are refusing to improve practices", she said.

"The bad has become normal," Grandin said in remarks at an organic food industry conference.
She also is concerned, she said, about egg producers' continued use of battery cages to house hens. "The cages are not large enough to allow the hens room to express their normal behaviors of perching, nesting and scratching," according to Grandin.

"Conditions are especially bad on farms that primarily sell their eggs in a liquid or powder form rather than in the shell", she said in an interview.

"Those farms do not get audited by the companies that buy the product, and cage sizes are so small that the hens have to sleep on top of each other", Grandin claims.

While visiting dairy farm she says

“That’s one sad, unhappy, upset cow. She wants her baby…It’s like grieving, mourning—not much written about it. People don’t like to allow them thoughts or feelings.”

Dr. Temple Grandin, Author, Animal Scientist, Agricultural Consultant: “I think some of this is, you know, big customers demanding it and the other thing I think is every phone is a video camera now with an instant Internet hookup and I think that's another factor.  Because I've had a saying I've had for a long time, heat softens steel.  And then reformers like me can bend it in to pretty grill work.  And the thing is I want to bend it in to pretty grill work, not just have a mess.  We've got to do practical things that are going to work.”

"Dehorning hurts," said Grandin. "It's a lot of stress and we should be giving them a lot of anesthetics. The research is clear. The dehorning is the single most painful thing we do."
Jan 2010

“I was very impressed with the dairy,” she told HAT. It was beautiful! Let’s look at the things I’ll score on animal welfare. Body condition, excellent. They’re getting 3 ½ lactations per cow. Lameness, I watched some of them going up to the milking parlor and I didn’t see any lame cows. Conditions of hots and legs was absolutely beautiful. I didn’t see swellings, and clean. They were nice and clean. Those are really important things for animal welfare in a dairy. And I watched the cattle go into the circular parlor and they were just going in all by themselves nice and quiet. That’s the way it’s supposed to work.”

There’s a close analogy to that radicalism—abstractification abstractifying itself even further—in the business of breeding animals for industrialized agriculture. Grandin has inspected hundreds of packing plants and feedlots and seen hundreds of thousands—if not millions—of hogs. She tells me about a problem that crept up on breeders trying to create extra lean pigs. She would walk through a yard, “shaking gates,” as she puts it. “I noticed that these pigs were absolutely hyper. They slowly got more excitable. If the only pigs you see are those pigs, then you don’t realize how bad they’re getting. I call that bad becoming normal.” The same thing has happened in chicken breeding.

In her book Animals in Translation, Grandin quotes the Aboriginal saying “Dogs make us human.” This is a simple evolutionary truth. “People wouldn’t have become who we are today,” she notes, “if we hadn’t co-evolved with dogs.” But humans need more than a shared history with animals. We need a co-evolving present as well. We need their eyes upon us, asking us, if only implicitly, who we are.
Discover Magazine 2005

"For me, the ideal family dairy farm would be smaller and local with 75-200 of free grazing cattle and enough clean, well maintained robotic milkers. Farmers wouldn’t have to be around 6am and 6pm every day for the drudgery of milking. But, neither will the cow. She will be free to graze and come in to milk when she wants to or needs to."
Lely Robotic Milking marketing website.

A professor of animal science at Colorado State University, she has authored or coauthored more than 30 books and has also spoken widely about how her own autism gives her insights into how animals think and feel.

"In dairy cows, reproduction rates have fallen over the years as milk production rates have risen. People think they can override genetics and breed a cow that makes lots of milk, has lots of calves, and has an immune system that can fight off disease. But it takes energy to make milk, make calves, and maintain that immune system. You can’t feed a cow enough to support all of those functions. Nature has a system: When an animal gets too thin and there’s not enough feed, reproduction shuts down. If the animal does conceive, her body funnels nutrition into the fetus. It takes two years to grow a dairy cow, and they’re only lasting through two lactations."

"Biological overload also overruns animals’ immune systems. As one example, there was a huge diarrheal epidemic in pigs last year. I’m worried that we’ll push too hard and cause a big disease outbreak. We need animals to be hardy, and you have to give up a little bit of productivity to get hardiness."
Food for 2050 Forum

It's time for food producers to decide who, among Jolley, Runkle and Grandin, is for us and who is actually working against us!