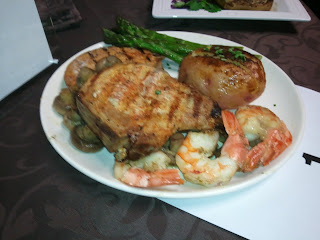 This week has brought about news that meat consumption increase your risk of Type 2 diabetes. Well that is saying that 80 years ago we did not drive cars, today the average American drives 24,000 annually cars must be the cause of an overweight society.

Lets look at some facts that too many people are overlooking.

Changing Trends: A Brief History of the US Household Consumption of
Energy, Water, Food, Beverages and Tobacco

The level of food energy in the US food supply increased from 3300 calories per capita per day in 1970 to 3900 calories in 2000 (Figure 9). This 15% increase reflects higher levels of all three food groups, carbohydrates (grains & sweeteners), fats and proteins (grains, poultry & cheese). Total calories in 1909 is estimated at 3400 kilocalories/day, so the level was flat for several decades before the recent increase.

Even the kids health website talk about how carbs drive blood sugar and insulin not fat and protein. I am not saying avoid carb's I am saying that the science simply does not back up that protein and fat play a role in diabetes. Furthermore the study conducted recently at Harvard on diabetes was a survey not blood work.

And finally speaking to the importance of nitrate rich foods

Dr. Bryan is a biochemist and physiologist in Houston at the University of Texas at The Brown Foundation Institute of Molecular Medicine for the Prevention of Human Diseases. He tells me that by the time we are 40 years old our body only has half of the nitric oxide production that it did when we were 20. So get ready for this ground breaking scientific breakthrough: Diet and exercise become even more important and lead to improved human health through restoration of nitric oxide.

WASHINGTON, DC - The U.S. Department of Transportation's Federal Motor Carrier Safety Administration (FMCSA) announced today that it has no intention to propose new regulations governing the transport of agricultural products. The agency also released guidance designed to make sure states clearly understand the common sense exemptions that allow farmers, their employees, and their families to accomplish their day-to-day work and transport their products to market.

After hearing from concerned farmers earlier this year, FMCSA initiated this review to make sure states don't go overboard in enforcing regulations on agricultural operators, and to ensure consistent access to exemptions for farmers. No regulations will be proposed for any new safety requirements or changes to the rules governing the transport of agricultural products, farm machinery, or farm supplies to or from a farm.

“We have no intention of instituting onerous regulations on the hardworking farmers who feed our country and fuel our economy,” said Secretary Ray LaHood. “Farmers deserve to know that reasonable, common sense exemptions will continue to be consistently available to agricultural operations across the country, and that’s why we released this guidance.”

This guidance – which does not impose any new rules on farmers – follows the Federal Register public notice which FMCSA issued on May 31, 2011, asking farmers, farm organizations and the public to give input on the agency’s longstanding safety rules.

"We want to make it absolutely clear that farmers will not be subjected to new and impractical safety regulations," said U.S. Transportation Deputy Secretary John Porcari. "The farm community can be confident that states will continue to follow the regulatory exemptions for farmers that have always worked so well."

“FMCSA is pleased with the input we’ve received from the agricultural community and members of Congress. We received about 1700 comments and the vast majority called for us to preserve the guidance that leaves states to carry out the farm exceptions as they have for many years.” said FMCSA Administrator Anne Ferro. “We want to make crystal clear that we are not imposing any new regulations.”

Earlier this year, farm groups came to FMCSA with concerns that some states might not allow exemptions to Commercial Drivers License (CDL) requirements for certain farm operations using “crop-share” leasing.

When FMCSA investigated, there appeared to be wide differences among states in how the “for-hire” and related agricultural exceptions were being applied. In order to ensure consistency, FMCSA asked state officials to cease all new entrant safety audits on farmers engaged in “crop-share” leasing and issued the public notice soliciting input that would provide insight on the complex use of farm equipment on public roads. The guidance released today, which is based on that input, clarifies three critical issues:

Interstate vs. intrastate commerce. Since the difference between the two has been determined by the U.S. Supreme Court and other Federal courts, FMCSA has limited flexibility to provide additional guidelines. The Agency has concluded that new regulatory guidance concerning the distinction between interstate and intrastate commerce is not necessary. Generally, the states and the industry have a common understanding on this point. To the extent that fact-specific questions arise, the Agency will work with the States and the industry to provide a clarification for the specific scenario.


Commercial Driver's License. Federal regulations allow states to make exceptions to Commercial Driver's License (CDL) regulations for certain farm vehicle drivers such as farm employees and family members, as long as their vehicles are not used by “for-hire” motor carriers. Some states have questioned whether this exemption applies to drivers who work for “crop share” or similar arrangements. FMCSA’s notice includes guidance to ensure consistent application of the exemption. After considering the public comments, the Agency has determined that farmers who rent their land for a share of the crops and haul their own and the landlord’s crops to market should have access to the agricultural CDL exemptions given by the states.


· Implements of Husbandry. In a perfect world, farm vehicles would only operate on farms, while commercial trucks would operate on public roads. The reality is that farm equipment that is not designed or intended for everyday use on public roads is often used for short trips at limited speeds. This creates a gray area for classification. After considering the public comments, FMCSA has determined that most States have already adopted common sense enforcement practices that allow farmers to safely move equipment to and from their fields. In areas where farm implements are common, the enforcement community and the agricultural community have achieved a mutual understanding of which safety regulations should apply to farm equipment on their public roads.

FMCSA is committed to the safety of our highways and the long-term success of America's agricultural industry. To learn more about federal safety regulations that impact the transportation of agricultural products and equipment, please visit the FMCSA website at www.fmcsa.dot.gov.