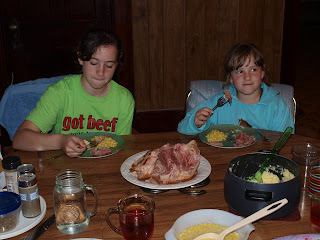 Libbi and Lindsi Loos enjoying a bone in ham at home

Pork on a fork

Last week the Egyptian government, while admitting that pigs do not pose a human health risk, began slaughtering their entire 250,000 head population of pigs. Pig farmers, stripped of their livelihoods, took to the streets in riot and were pushed back with tear gas and rubber bullets. Knowingly, the Egyptian government acknowledged the lack of risk yet chose to slaughter the pig herd. Here at home, pork producers have been struggling with high input costs and were just about to see a little light at the end of the tunnel when major media sources, along with the Center for Disease Control, turned the tunnel dark again.

Our nation’s pork producers are in desperate straights. I am one hundred percent about using the law of supply and demand but I think the answer to this situation is to find a way to increase demand and do it immediately. It just so happens that I have an idea.

Let me first state that I question whether or not the change in domestic demand for pork has been affected much by the outbreak of the H1N1 virus. It is not a scientific poll by any means but I contacted people that I know in the retail and restaurant business to get their takes on the subject. Mike Endsley, who works for Newport Meats based in Los Angeles, calls on high end outlets in Southern California and tells me demand has not cut back at all with the latest flu situation. He did tell me that they have stepped up their own educational efforts in an attempt to make sure customers have the facts surrounding H1N1 but pork is an excellent product with a lower purchase price.

Next I called on my favorite BBQ restaurant in the entire country, which happens to be in Memphis, TN, called the Germantown Commissary. I talked to the owner, Mr. Walker Taylor, about the same situation. He told me that no costumer has even asked about the situation and his level-headed costumers recognize media hype when they see it.

He did go on to indicate a certain level of frustration that bone-headed lawmakers may not have the same common sense approach that his customers do and is concerned they may attempt to put something in place that will make it even tougher to get local pork. Mr. Taylor told me point blank, “We can’t get local pork any more.” I am here to tell you that it is not because farmers in the Mid-South have lost the desire to be in business but that excessive regulatory programs have put them out of business. Case-in point is Fineberg Meats, Germantown Commissary’s former pork supplier.

Here is my plan. I believe we truly need to connect the dots not only for our over-zealous lawmakers but for media and consumers globally. You know it has been said that the best way to anybody’s heart is through their stomach. Today I am launching a campaign and encouraging all people who eat food to enter the Faces Of Agriculture sponsored event called “Pork on a Fork”.

I expect you to send photos of family members, friends, customers, anyone, anywhere eating pork. On May 26, 2009 the photos will all be judged and the winner will be announced. The winner will receive a all expense paid trip for two to the World Pork Expo happening in Des Moines, IA June 3-5 2009. I will personally see to it that the winners are given the Royal VIP treatment and access to anything and everything pork related during the event. All entries will be available for viewing during the entire World Pork Expo plus on all Social Networking sites. In fact, the winner could be recorded and become a YouTube Pork connoisseur for all the world to see.

We need to put the sizzle back into the pork business before all of our pork producers are forced to exit their operations and find a new livelihood. Just as Walker Taylor told me, he can no longer get any local pork so it is time we explain to the world the importance of the American pork industry. Another old cliché that certainly makes my point an applies here is “A photo is worth a thousand words.” I can tell you that Mike Endsley from Los Angeles is excited about telling his customers they could be awarded the pork promoter of the year and a trip to Des Moines aren’t you?. Get more details on the website at www.FacesOfAg.com. Send photos to me at trentloos@gmail.com and I will see you in Des Moines at the World Pork Expo.
at May 05, 2009 No comments:

On Earth Day you spoke at Garden City Community College. I get your newsletter and was very excited to hear you speak. Just wanted to let you know that a TON of kids really loved you and the rest of the day the campus was buzzing because we actually had a pro-agriculture speaker instead of many of the liberal, Humane-Society-type speakers that the teachers like and the kids hate. Thanks for not being afraid to say exactly what you believe. We agree with you!