Consumers are not always right

IN this information age, is there such a thing as too much information? Is the human brain capable of computing all of the information it acquires?

Last week, I attended the Worldwide Food Expo sponsored by the American Meat Institute and the International Dairy Food Assn. The first day of the expo was filled with tremendous meat research. Information was presented about the latest discoveries from the laboratory about health, safety and nutrition.

The presentation that stuck with me most was from Dr. Nathan Bryan of the University of Texas' Center for Cell Signaling. Bryan has spent his research career studying the effects of nitrites and nitrates on the human body.

He reminded us that nitrites have been used for more than 5,000 years as a food preservative. In the 1970s, a study was released that connected nitrites, particularly those found in meat, with an increased incidence of cancer. The public perception of nitrites has been a downward spiral ever since then.

Bryan's research clearly shows that nitrites and nitrates are closer to a health food than a carcinogen. Of any food source, leafy vegetables, considered by most to be a health food, contain the highest level of nitrates. In fact, the European Union, in its infinite food wisdom, reported that "since leafy vegetables are the main source of dietary nitrate, the EU established maximum limits for nitrate content in lettuce and spinach in 1997."

My point is that if you would randomly ask consumers where nitrates come from in their diets, bacon and ham would get all of the blame. I am not sure many would actually know that leafy vegetables are a primary source.

Bryan's research suggests that dietary nitrite is NOT causing cancer and is actually a beneficial compound in the prevention and treatment of cardiovascular disease, and that makes me wonder if we are trying to over-regulate a healthy compound.

Bryan is quite excited about how important the compound could be if used properly for prevention of cardiovascular disease. For bacon lovers like myself, this is indeed good news: One of our favorite foods could now be viewed as a health food.

Given the research of Bryan and others that has all been inconclusive in regard to the risk associated with nitrites, why, then, is a line of "nitrite-free" meats being unveiled to consumers in December? I've been told it is because the company launching this new line was simply tired of getting beat up on the nitrite issue and just decided to "give the consumers what they want."

While that may indeed be the right step for a food company interested in making a profit, it can be a risky move for those involved in the rest of the food production chain and, for that matter, for consumers.

The fact of the matter is that consumers are not always right about what is in their best interest. Food companies exhibiting at the Worldwide Food Expo made it quite clear that if they identify something a consumer is willing to pay for, they will sell it.

That basic thought process is even trickling down to the production level of food production and is resulting in unattainable animal handling and behavior standards.

It is time we start educating our consumers about the facts and dispel the myths that are forcing increased and unnecessary regulations on producers. The proof is in the figgy pudding in the EU, which is trying to regulate Mother Nature in regard to leafy vegetables and nitrites.

In addition to nitrites, a similar situation has been unfolding in the milk arena, where the consumer has been incorrectly convinced that fat should be avoided at any cost. The message there has been to drink low-fat milk and be leaner, but we are quickly learning how flawed this is, especially in light of conjugated linoleic acid (CLA) studies. Ironically, consumers are now trying to supplement their diets with the fatty acid instead of simply consuming foods that are naturally higher in the substance ... like whole milk.

Dr. Mark Cook at the University of Wisconsin has proven that whole milk contains higher levels of the fatty acid and provides tremendous health benefits. CLA can increase lean body mass and decrease fat, inhibit the growth of tumors and enhance immune function. CLA also is found naturally in beef and cheese, yet consumers continue to avoid fat.

If we choose to continue to be in food business, the end user needs a tremendous level of education. If we don't educate, the consumer will demand a food product that does not impact the planet, allows for no death to plants or animals and contains no additives. Little do consumers know that their misinformation about dietary issues may actually be what kills them.

Trent Loos is a sixth generation United States farmer in Central Nebraska. He also host the Loos Tales radio program and was recognized by West Quest as the Voice of Rural America. More information at www.LoosTales.com or email him at trentloos@gmail.com
at April 02, 2012 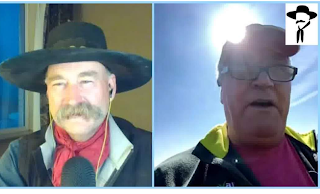