I will warn some of you to go ahead and get your pen ready because you are not going to like what I suggest today. This idea hit me as I was heading to San Antonio, TX for the National Block and Bridle meeting. I was so fortunate to once again be asked to serve as the opening speaker for their three-day convention. I have repeatedly shared that the energy, intelligence and desire that I find within the young people in agriculture is all the inspiration we need to find a better way to tell the story of food production. This idea hit me as 750 young people from 37 colleges and universities filled the room. We need a contest. Let’s call it the “hot peppers in agriculture.”

With all of the challenges that we now face in regard to the future of American Agriculture, I am still convinced that the number one challenge is encouraging young people to return to production agriculture. For the past five years I have been amazed at how “our kids” are treated in public settings. I am frequently told about kids who attempt to hide the fact that their parents are farmers or ranchers. The stereotype still exists that we are bib-overall-wearing simpletons. So how do we turn around the public sentiment and set the story straight about the good-looking, smart farm kids that all other kids should look up to and admire?

Perhaps we should look at what has worked well for other industries. Sports Illustrated, which is all about baseball, basketball, football, golf and tennis, generates more interest from the swimsuit edition than any other. Apparently more profit as well. The Alley Insider reports that the Sports Illustrated swimsuit issue makes up 11% of SI's annual revenue. Alley Insider calculated that this meant that the swimsuit issue was five times more profitable than the sports issues the magazine produces the other eleven months of the year.

What do swimsuits have to do with sports? Where would Christy Brinkley be without the swimsuit edition? Southwest Airlines has just announced that they have one plane painted with a full-length photo of this year’s Sports Illustrated cover girl Bar Refaeli in a white bikini. This week it was announced that you could now watch 5-minute videos of the swimsuit edition online.

For this year’s Super Bowl, the PETA ad that didn’t even make television, generated more than it fair share of free publicity. I am sure you have heard by now that PETA’s ad was rejected by NBC and did not run during the Super Bowl. The ad was a video of steamed broccoli. The sexy girls were not actually eating the broccoli and the steam was not generated by boiling a pot of water on the stove, if you know what I mean. An ad this tasteless could have only come from one place and you know as well as I do that PETA never for one second planned for the ad to air on television because that would have cost them $3 million. Instead, thanks to the big scuttle about the ad not airing, over one million people viewed it on YouTube and it cost PETA absolutely nothing.

I hear you shouting at me that we are not going to resort to the tasteless tactics of PETA. We will stay with the decent family values that have always been our priority. I agree, but I do believe we could be a little more creative when it comes to getting the attention of the non-farm audience. Let me give you an example:

I met Kassandra Simpkins 5 years ago at the Nevada State Fair in the Pork Producers booth. This 16-year-old pig showing enthusiast also happened to be very pretty and smart. She had just landed a modeling contract and I posted a few of her photos on my website. Some of the photos were of her modeling, one of her in a swimsuit her mother made for her and some were of her showing pigs. By the way, her mother forwarded all of the photos to me. Of the thousands of people that go to my website every day, a full one third of those viewers follow the link and look at the photo gallery we posted of Kassandra.

So I am launching the “Hot Peppers in Agriculture” contest and requesting your tasteful photos of people in agriculture that might get someone to stop and look and say, “Hey, I would like to find out what this person is all about.” By the way, I am not talking about a gender biased scenario here, I am requesting male and female photos be emailed to me. I am not restricting it to young people. There are some hot moms and dads in American Agriculture and we need to get them in the limelight as well. My goal is simple here: I want to capture the attention of the non-farm audience and let the world now that it is “COOL” to be agriculture and I predict we can turn around the negative stereotype that has clouded the image of our great industry ever since Grant Wood painted the American Gothic in 1930!

Once we get their attention, we will run follow-up stories on the people behind the photos and their role in feeding the world. What better way to grab the eyes and ears of the public and give them a chance to see a real view of the Americans that provide food, fuel, fiber and national security for our country? This time we will paint the portrait using our own canvas.
at February 24, 2009 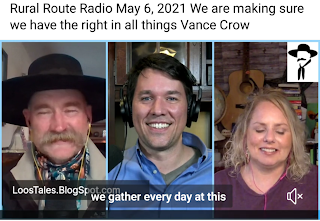