Cow valuable in environment, too 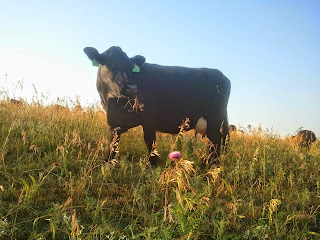 I am not exactly sure how this has happened, but suddenly the cow is everybody's whipping boy. Every time you turn around, someone else is chiming in about not eating beef, not because it is unhealthy but because they think the cow is toxic to the planet. First of all, anyone with a base of common sense at all will understand God would not place an animal on this planet that is toxic.

There are plenty of ways cows benefit this planet. I remember speaking in Globe, Arizona, and touring the copper mine tailings on the edge of town. The tailings from a copper mine are absolutely sterile and nothing will grow there. There was a 300 foot high pile of sterile dirt just standing on the edge of town, dusting over everything whenever a brisk breeze stirred it up. Then range scientist Terry Wheeler had an idea.

He used cows to turn this pile of nothing into something valuable. By feeding hay laced with some grass seed and rotating the cows vigorously around the hillsides, Wheeler quickly turned the piles of dust into a tremendously rich-soiled pasture that cattle could graze. Astonishingly, cows accomplished the task of building a forage base they could then convert to human consumable protein.

The cloven hoof of a cow is excellent for aerating the soil. The manure of these ruminants is the most perfect fertilizer and source of nutrients. Grazing, in and of itself if properly managed, is the healthiest possible way to regulate cellulose material. I will emphasize "properly managed" and 99 times out of a 100, ranchers do that well.

One of many studies about the benefits of ruminant grazing was conducted at Carleton College and UC Santa Cruz and was published in "Ecological Applications."

Even the USDA has a 50-year study conducted by Richard Hart that documents how moderate cattle grazing improves plant diversity. Hart's work goes so far as to say that overgrazing promotes even more plant diversity than non-grazing.

For anyone who actually wants to open-mindedly look at the real science, it is clear to see that the grazing animal does nothing but improve the planet.

Recognizing that 75 percent of the total land mass in the United States is not suitable for growing crops but is capable of growing grass, cows are vital components to not only a heathy planet but a well-fed nation.

Once we have removed grazing from the discussion, it comes down to what a cow eats when they are not grazing.

I admit in the U.S. we pride ourselves on corn-fed beef and believe this beef is important in order for us to continue to exceed all other beef producing nations. It truly is our market niche and no one else comes close to matching it. With that said, we must remember that even in the lifespan of the best corn-fed beef animal, less than 30 percent of its total diet originates from grain.

The ruminant animal is a cellulosic converter of grass into human consumable protein as well as a lengthy list of other by-products that improve human lives on a daily basis, from marshmallows to tires and paint brushes to medicinal supplements.

The cow truly needs to be appreciated for the amazing creature she is and the many ways she works to improve the health of the planet and the humans living here, rather than the political toy she has become to further the agenda of the radicals.

The Chinese may consider 2015 to be the year of the sheep, but I think it's time we in America celebrate the many great things that cows do for us every day.