I am not flocking you (Farm Aid Fraud AGAIN) 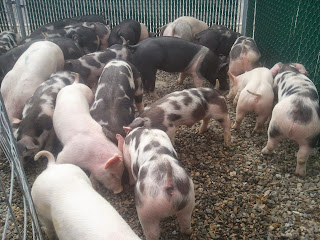 As printed in the High Plains Journal more at www.HPJ.com

Here is what you will find on the Farm Aid website:

"We've worked side-by-side with farmers to protest factory farms and inform farmers and eaters about issues like genetically modified food and growth hormones."

In another place on the site they define what a "factory farm" is. They say anyone who is confining animals and not grazing is a factory farm. That means our operation with 60 sows on dirt that farrow in a farrowing house with the pigs then going to a nursery is not considered a family farm by these "experts."

So with the Farm Aid organization working against every single technological advancement that has propelled the United States into its position as a global leader in food production, I should not at all be surprised that in September they will once again be campaigning against farmers and our ability to feed future generations.

Neil Young and Willie Nelson, the founders of Farm Aid, will appear alongside one another for a concert on Sept. 27 in Nebraska to protest the projected Keystone XL pipeline in Nebraska. If you think that is just an oil industry issue and has nothing to do with farmers, you better think again. This is about to be a nationwide crisis.

Community Health Systems (CHS) and others report the basis on farmers in the Great Plains, particularly the Northern Plains, is 50 cents per bushel, and there have been times in the past year when the basis was well over a $1 per bushel.

As the 2014 crop harvest is fast approaching, on-farm storage is still being consumed by a chunk of the 2013 crop. The number of railcars carrying crude oil on major freight railroads in the U.S. is projected to have grown by more than 6,000 percent between 2007 and 2013, according to the Association of American Railroads.

The state of North Dakota is now producing 1.1 million barrels of oil every single day and without a pipeline, it is being moved by tying up rail cars, which means there are no cars to transport grain, causing a serious problem for farmers. The average rail car moves 691 barrels of oil. The pipeline will move 750,000 barrels a day or the equivalent of 1,085 rail cars per day. A rail car holds 3,200 bushels of corn so 1,085 carloads amounts to 3.4 million bushel equivalent per day.

This rail car tie-up problem isn't limited to the farmers in the Northern Great Plains. Recently I was in the farming rich area of upstate New York. Ed Gale has been in the fertilizer business for 50 years and told me he has never seen the like in regard to rail transport of potash for his customers. They are backed up over 2 1/2 months, and it looks to get worse because potash comes from the Northern Great Plains in Saskatchewan.

There is a plenty of misinformation regarding the pipeline. I can't tell you how many times I have heard, "Trent, that Keystone pipeline isn't going to carry U.S. oil but just oil from Canada." Actually, 25 percent of the oil to be transported will be U.S. Bakken oil, but does it really matter? It ALL needs to be transported out of there to the end user, and we certainly use our share. Is it better to keep doing what we are doing and decrease revenue for farmers while we increase costs for consumers?

So when I hear that Farm Aid, who has not done anything except file lawsuits against farm families who are trying to make a living and produce food, is coming to Nebraska to protest against another thing that farmers need, I get agitated.

It is one thing for activist groups to work at causing the farming sector interference as the pseudo-environmental and animal rights groups do. It is a completely different thing when an organization fleeces the public for funds in the name of helping farmers and then uses those funds to shut farmers down.

Isn't it ironic that "fleece" is made from 100 percent petroleum yet pretends to be a product of agriculture? It is high time for all of us to expose the deceptive ways of Farm Aid and tell them to get the flock out of our hair.

Trent Loos is a sixth generation rancher who travels the country to promote the people in agriculture through his public speaking and radio programs. He writes columns for several publications and his work may be found at www.LoosTales.com.