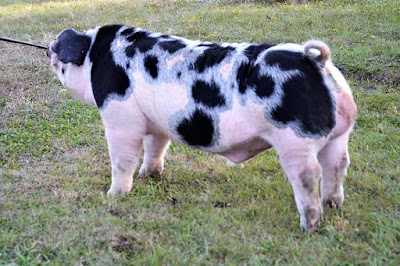 This guy was 6 generations in the making. First off and what I think is most important his mother 3-4 is one generating machine. She is currently sitting in the top 5 in our herd on SPI, and the is fast race here. No matter who she is bred to she makes the pigs better. I have never worked with a boar that was so calm in his disposition and better to collect than Harvest Moon. He only sired 14 litters in 5 different herds but the consistency in the pig crop shines above all others. In Feb 2019 he was jumping up on a wall looking for sows to breed slipped on the ice and messed up vertebrae in his back. We lost him but his legacy is so strong already. His very first litter he sired the 2019 Hog College Gilt and was received extremely well by all who saw her at National Barrow Show 2019. 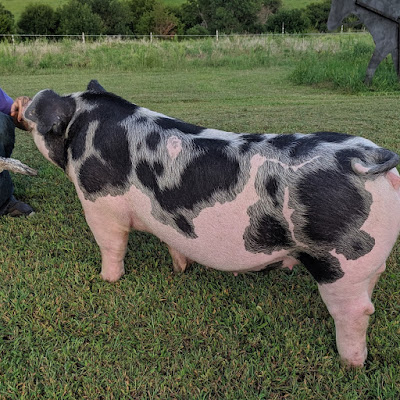 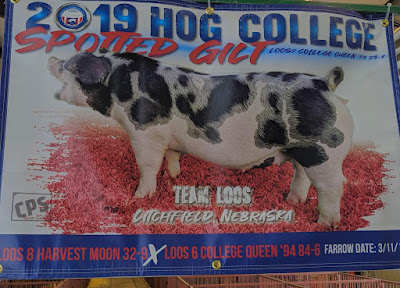 We currently have 3 sons and just short of 30 daughters of Loos Harvest Moon working in the herd. Headliner that is his May 22, 2019 boar we call Loos Snow Moon. Picture below he is currently being collected and semen is available call Trent at 515 418-8185 or email TrentLoos@gmail.com 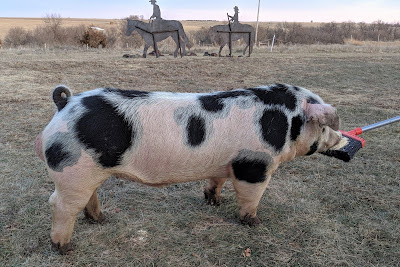 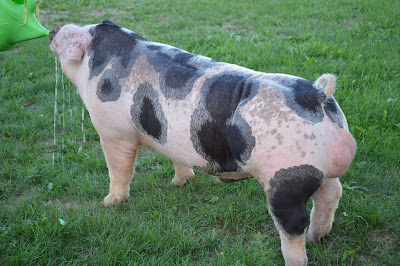 Loos White Cloud is the sire of Loos Harvest Moon. His daughters are doing a fantastic job in our herd in fact Loos Snow Moon is a double bred White Cloud as his mother is a White Cloud daughter. Where he really excels is in rib shape and the volume of muscle that he puts in every pig. I don't mean simply a big butt. I am talking about look at the dimension and mass in the front 2/3 of this boar. Loos White Cloud served a very good purpose here at Team Loos and like all good breeding animals his progeny will make him look better and better every generation. 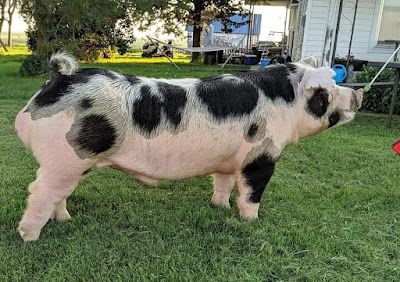 Losing Loos Harvest Moon was tragic no doubt. After we did fortunately we had another Loos White Cloud son that could step in fit the bill. In fact to date he has been our best semen selling sire as he has settled sows in 14 states in 2019 alone. His mother another CaBoose daughter is a full sister to Loos Boxcar and has herself shined in the farrowing crate. The first litter sired by Storm Alert was born in Sept 2019 and his pigs look to fit the mold. Deep in quality sound in structure it is just very rewarding to have folks call you when the pigs are born and tell you how good they really look. If you are looking for very well balanced attractive Spot pigs that will undoubtedly improve sow performance Loos Storm Alert will get it done. Call Trent 515 418-8185 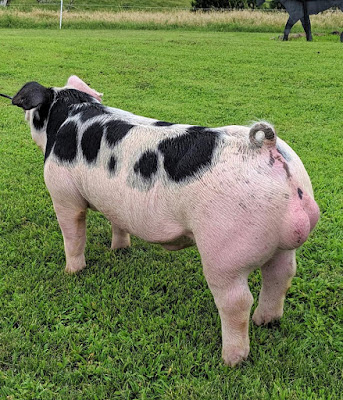 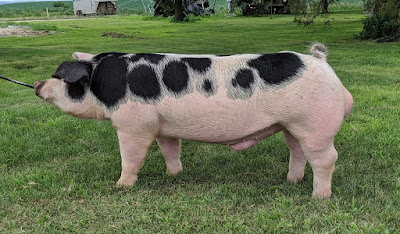 Loos Cargo was born Jan 2019 and have just him quite heavily myself on some of our best powerhouse sows. He is out of the same 5-2 sow as Loos White Cloud and Loos Wheels and Deals and is sired by Loos Box Car pictured below. The 5 litter which he came from was top to bottom the most powerful litter we raised in 2019. Also pictured below is Loos Gertrude our Landri J had a ton of fun showing in 2019. She placed well at STC, Res Champion Spot breeding gilt at both Nebraska State Fair and AKSARBEN. Although it is in the farrowing crate where I think she will really be the Champion. Folks love the color pattern on Loos Cargo but I am really excited to see his progeny and I think they will take us to another level in structurally correct functional Spotted hogs. Great semen producer call Trent 515 418-8185 to order. 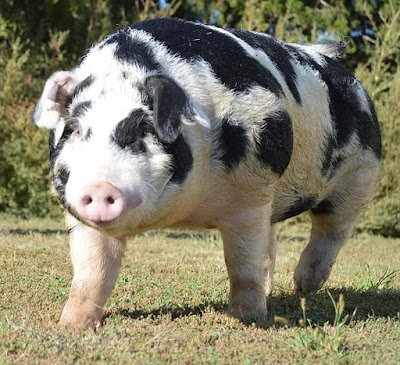 For Reference Only
Loos Box Car 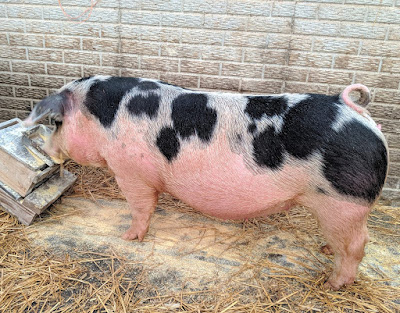 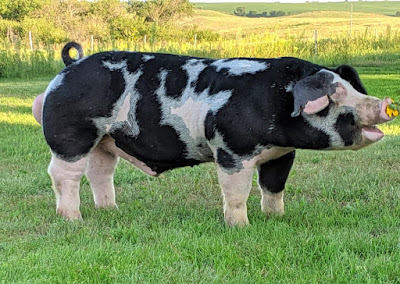 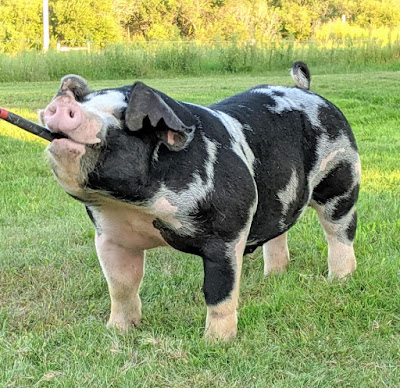 Without question Loos Sarge was the exciting boar we raised in 2019. We exhibited him at the 2019 National Barrow Show and he was top selling boar at $5000. Jim and Monica Reinfeld of North Dakota purchased him. We cut a deal with them so that he may stand at stud here at Team Loos. In fact that was the most common statement folks said while viewing him in Austin, "He is a stud." Typical for the semen season late September is after most folks have made their sire decisions for fall breeding but the phone is starting to ring already for those summer litters. Sired by The Rookie who I named Grand Champion Spot boar at the 2018 Iowa State Fair then bought him his mother is the real deal. Loos Queen Bee 55-1 is currently our top SPI sow at 112.3 clearly the best producing daughter of Queen Bee yet. I might mention her littermate 55-4 is second in that race. That sow Queen Bee 8-5 has OVER 40 working progeny in our sow herd. We have 4 generations of her and to tap into the performance, mothering ability and attractive looks the STUD offers is an opportunity one should not miss. Booking now through Spring breeding season
call Trent 515 418 8185 or Monica at 701 426-5083.

Rural Route Radio Dec 24, 2021 Marty Beard with all things Christ mas, I mean we talk the real meaning of Christmas on the Eve.